Ten Electrical Questions You May Not Know the Answer To

When it comes to electricity in the home, many homeowners may be unaware about many of the design choices and features that make our electrical infrastructure so useful. We've taken some questions we've heard over the years and compiled them to provide you with a handy resource!

How many things can I plug into one surge protector?

When it comes to surge protectors, power strips, and outlet extenders, there might be times when there are free spaces, but it would be inadvisable to plug something else in. Too many devices that require too much power at once can lead to an overloaded circuit, which could be potentially dangerous. ​

What is the purpose of the holes on my electrical plug prongs? ​

It is a commonly held belief that the holes in electrical plugs help the socket, which connects to an inserted plug by pinching each prong between two metal pieces, to connect more securely to the socket. The truth is, the holes do not help connections at all – in fact, it's even possible to find plugs that have no holes at all! 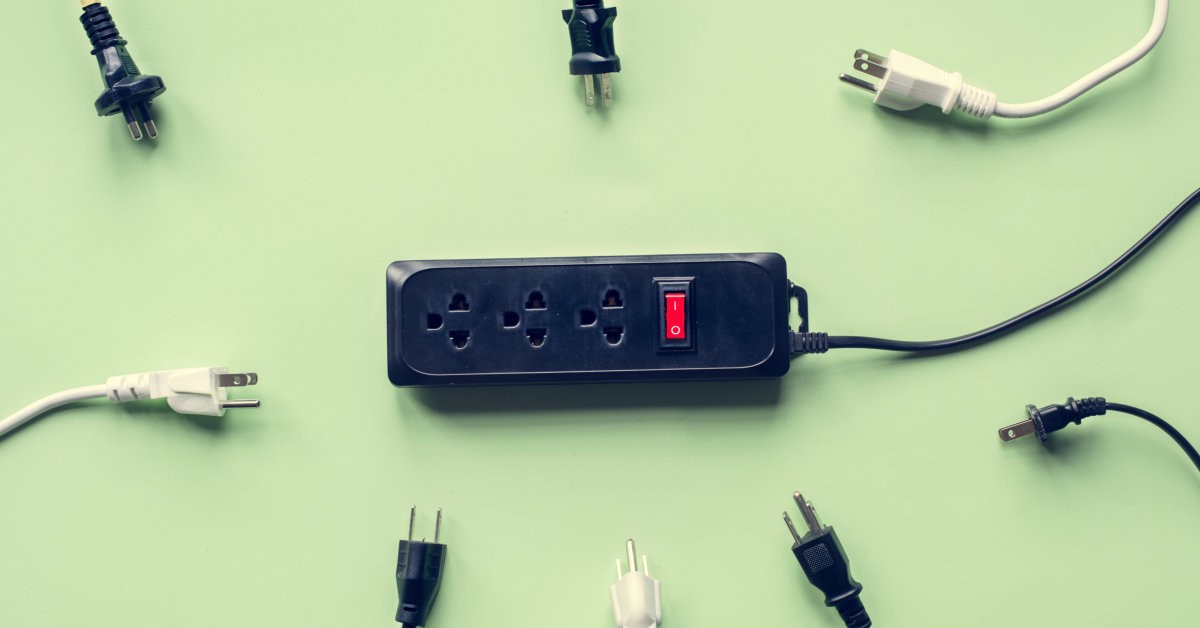 The National Electrical Manufacturers Association (NEMA) is the authority on electrical sockets and plugs in the USA, how they are designed, and how they function. According to those standards the hole is optional but can be used for manufacturing. In some instances, manufacturers will thread a bar through the two holes in the prongs to keep them aligned while assembling a plug. NEMA does describe exactly where the holes must be, though, to keep them from interfering with the electrical connection.​

Is a GFCI the same as a surge protector? ​

GFCIs, ground-fault circuit interrupters, and surge protectors both have extremely important purposes for ensuring you, your home, and your devices stay safe when the worst happens, but you may be surprised to find that their purposes are very different. Surge protectors protect devices against surges of electricity, which can happen during lightning strikes, electrical overloads, when power is restored after an outage, and more. A GFCI breaks an electrical connection when a change in current is detected. GFCIs are required by many building codes in the US, and are recommended to be used in bathrooms, basements, garages, kitchens, and anywhere water is nearby an electrical socket.

What is a tripped breaker and how can I fix it? ​

Somewhere, there is a panel of circuit breakers that control the flow of power to specific sections of the building. These circuit breakers have many uses, such as providing a convenient way to shut off power to a specific room when electrical work is under way or preventing damage or fires when a circuit fault is detected.

These can trip based on a few events, such as a power surge, electrical arcing, ground faults, and short circuits. When an overload in power traveling along a wire could cause that wire to dangerously overheat, the circuit breaker trips to prevent a fire.

Why do my sockets sometimes spark when I plug things in?

It can sometimes be normal for a socket to emit a small, quick spark when plugging in a device. When plugging in a device, just before the prongs of a plug meet the metal connectors inside the socket, sometimes the power is strong enough to travel across the small space of air to the plug, emitting a small spark. If you notice larger sparks, more persistent sparks, or sparks that are accompanied by a burning smell, unplug the device and call H&H Electric immediately.

How can I tell if a wire's gone bad?​

Over time, electrical infrastructure such as wires, sockets, and such, can wear out. Signs of bad wiring can include lights flickering or dimming, warm spots in walls, fraying wires, or even buzzing or crackling sounds. If you notice any of these signs, or more severe signs such as a burning smell or burn marks on outlets, it's imperative to have an electrician take a look immediately.

How does a home generator work? ​

Home backup generators work to keep your home powered during an outage. When your backup generator detects that no power is flowing, it automatically kicks in to begin providing power to your home. These generators can be powered by natural gas or liquid propane and can be set to power an entire home or specific vital equipment. To learn more about getting a generator for your home, see our page on generators.

What is the difference between AC and DC power? ​

Power lines deliver power to homes via AC current, which can rapidly switch the direction in which it travels. Additionally, transformers can step down the power to make it safe for your home appliances to consume. Anything that plugs directly into the wall to receive power is powered by AC current.

DC current is the type of power that is delivered by batteries in your mobile devices, such as laptops and cell phones. This current can only travel in a single direction.

For devices that use batteries that are charged by plugging them into the wall, such as your laptop, a transformer is housed somewhere along the path of electricity flow, sometimes in a box that plugs directly into the wall, and sometimes mid-way along the charging cable. This transformer steps down the voltage of the power delivered by the electrical socket and transitions the AC power into DC power.

Why is a power surge dangerous to my devices?

If you were to measure your home power's current using a device called an oscilloscope, you would see that the current is represented as a wave over time, rather than a horizontal line showing 120 volts. This is because alternating current does not hold at 120 volts, but rapidly switches between 0 volts and a peak of 169 volts.

When lightning strikes, or other events occur, circuits are overloaded, which causes a circuit to provide more than the maximum of 169 volts to a device. That is called a surge. When wires are overloaded to the point where they are carrying more current than they are designed to, they can overheat, melt, and even lead to electricity arcing between connections that were not designed to directly connect. It's true that some devices have a small amount of protection against minor surges, but the best way to ensure your devices survive such a surge is by using a surge protection device with a high rating of protection.

Many of us know our electrical sockets to look like little surprised faces lining our walls. You may be surprised to know that not only are voltages different in other countries, but the entire design of an electrical socket can differ from country to country as well!

Modern American household plugs and sockets have a variety of features that set them apart from other plugs, including many plugs only fitting into sockets in one direction. This allows for polarization in a plug where reversing the "positive" and "negative" sides of a circuit could lead to a shock hazard or other danger.